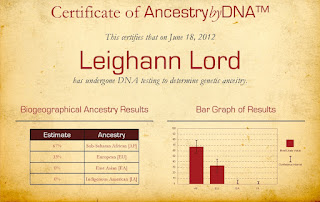 I wish I could say that I got myself DNA tested because of some deep desire to know who my ancestors are. If you’re African- or Caribbean-American you just accept the fact that you’re mixed. I wanted to get the lowdown on my ancestral DNA for the same reason I’ve considered getting my masters degree in sociology: for the jokes.

YOU CAN CLICK HERE NOW TO LISTEN TO THE BLOGCAST


For years I’ve harbored the suspicion that there’s some Asian DNA lurking in my bloodline. When I was 17-years-old a cab driver told me that when I smiled I looked Chinese. Yes, I was young and naïve enough to think this man knew what he was talking about. Of course my lack of mathematical acuity doesn’t support this and why today I don’t advocate talking to cab drivers.

My ancestral DNA test results revealed that I am 67% Sub-Saharan African and 33% European. Forty-seven countries make up Sub-Saharan Africa. That narrows it down from a total of 54 but not by much. My people could hail from:

I’ve shortened the list by deciding that my family couldn’t possibly be from countries I can’t pronounce. I also feel comfortable removing Rwanda, Nigeria, and Djibouti. Rwanda has tribal complications that I could never hope to truly understand. You say Hutu, I say Tutsi and suddenly everybody’s running around trying to kill the whole thing off.

I pass on Nigeria because I already get too much email. And while I may never again see my $137.16 that my good friend, and deposed prince, Babadeinde said he desperately needed, I sincerely hope that my modest contribution helped restore him and his family to their rightful royal rule.

Djibouti is geographically part of Sub-Saharan Africa but is politically considered North Africa. Either way it was not the Africa I dreamt of when I got the opportunity to go there as part of an Armed Forces Entertainment comedy tour. I thought it would be like going home to the Motherland. But with the debilitating heat, aggressive poverty, and bold street vendors that make Jamaicans look demure, Djibouti felt more like the Step-Motherland.

Of course I was tickled to see that South Africa is on the list of possibilities since I’m from the “Free Mandela”-Lady Smith Black Mambazo generation; not so thrilled that it’s considered the rape capital of the world. Hasn’t my bloodline suffered enough?

I guess I was most disappointed to learn that I’m not from Egypt. There is a deeply held delusion … I mean conviction … within the American Black community that we are all descended from kings and queens. All of us. Every single one of us. This is, of course, statistically impossible. Some of us had to have hailed from farmers, teachers, and stock brokers. But that doesn’t have the same caché.

As an African American what I have always found most challenging is meeting white Africans: White people who are born in Africa. None of us can choose the place of our birth. That comes down to where the water breaks. But right or wrong, the very existence of white Africans always feels like “Fuck you.”

It’s not a big shock that some of my ancestors came from Europe. Math is not my strong suit, but colonization equals miscegenation is a pretty simple equation. I was however surprised at the number: 33%? That makes me a full one third European and it explains a lot. Maybe my love of English accents, German precision and Italian shoes isn’t all that shallow after all?

But what happens now? Do I get a break on the dollars-to-euro exchange rate? Should I offer to buy my neighbor’s house for a necklace and then proceed to colonize my entire block? Should I have dated more white guys? I do love a man in a kilt.

The hardest thing to accept is that this knowledge really doesn’t change anything. No country, Sub-Saharan or otherwise, has rushed in to claim me. I guess subconsciously I’d been hoping that my cheek swab would reveal a little more specificity, like the name and address of someone wealthy. Maybe I shouldn’t be too quick give up on my very good friend Prince Babadeinde. There’s a 67% chance that we could, after all, be family. Maybe, that’s how he found me in the first place.

I envy you and am inspired. I want to do this too. Loved your humor in discussing what some would deem a sensitive topic. You're too cool. eee-yip

Leighann, I am a white woman with brown eyes. My husband (a scientist and teacher) explained that anyone with brown eyes has African roots. I've seen the graph of the migration of Africans to Europe and the farther north you go, the lighter the skin and the less brown the eyes, until you get to the blue-eyed people.

So, I'm thinking I'm probably descended from some African prince. I shall make my husband bow to me - well, more so than I already do.

You wouldn't be envious at all if you knew how long I've been procrastinating on this. LOL! I've wanted t to do the test for a LONG time. The only good thing about waiting was that the prices came down. It used to cost quite a bit, but now it's more reasonable.

As always thanks for reading. I really appreciate it as well your comment.

I did not know that! That's an awesome piece of information. I guess your husband had better limber up or break out the Ben Gay. :-)

as an atheist/freethinker you certainly are aware of evolution, which shows that all human beings are descendant of African apes.

Races do not exist.

You can have a demonstration of this reading in this link
http://www.dailymail.co.uk/news/article-2123050/Look-The-black-white-twins-turn-seven.html

about the story of a couple of twins in which one is totally white and the other totally black or, even more, reading about the phenomenon of Albinism, which implies that the blackest African can generate a totally white (whit even blue eyes) human being.
I think, as many in the scientist community, there is still a lot to discover about DNA.
More precisely, I think that the word “race” labels what we still ignore about DNA.
By the way, don’t bother about your ancestry, because from your photo in the blog I can see that if there is a race it is that one of beauty, since you surely - with 0 confidence interval- belong 100% to.

Good luck for your comedy and moreover for the “African Americans for Humanism” project.

An atheist (classified as white)

Hey Leighann,I'm surprised that there are hardly anybody that has done this test,the old Ancestrybydna 2.5 from the DNA DIagnostics Center(before it was done by a company in Sarasota,Fl called DNA Print Genomics until that company went out of business in February of 2009)anymore.My dad and both my maternal grandparents did this test recently and got our results on 6-12-12.I wanted them tested because you would have a better chance of detecting something like Native American if you have whoever in the family that's still living a generation ahead of you do it if possible(I had my dad because my paternal grandmother died in 2004 and my paternal grandfather lives in South Carolina and we live in Florida).The only reason we did Ancestrybydna is because we won it in a contest.My dad was real similar to your's,"68% African and 32%European",my granddad was "73%African and 27%European" and my grandma was "74%African,21%European and 5%EastAsian".We don't know if my grandma's 5%EastAsian is noise(some people who do this test will get results in the low single digit numbers and it will be a mistake.If you have results in the double digit numbers then that should be definite admixture even though the percentage may not be exact) or if it is really Native American mistyped as East Asian(some people who have Native American get East Asian instead on this test or they get both because they couldn't completely seperate the two).The confidence intervals(those black lines on the bar graph,they're like error margins)for both East Asian and Indigenous American on my grandma's results were high,over 10,but we don't know if that really means anything.Hopefully sometime I can get my grandma to do Familytreedna's Populationfinder because right now that seems to be the most advanced admixture test(23andme's amixture test aint good for black people because they got inadequate population sampling,just about if not all black folks,whether they're African Americans or Africans from Africa will get "Asian" percentages whether or not they actually have Asian or Native American ancestry)and see more definitively if there really is Indian inthe family (though it would be smaller than the white)Ancetrybdna's Facebook page was on early yesterday but sometime either late yesterday or earlier today it went out but the website is still on even though they haven't done anything about the price,they said it would be $195 till the end of May(I think they started that sale back in October) but it's July 7 now.I wouldn't be surprised if sometime not too long from now they pull the plug on Ancestrybydna.Thanks for sharing your results!

I agree with you. The word race is completely inaccurate. No testing needed to know that we are all (unless Douglas Adams was right) Earthlings. I keep a towel handy just in case.

It just goes to show that we are very hostile and divisive species. Thanks for reading and sharing the link.

Thanks for sharing your results with me too. Cool that you won the opportunity to test through a contest. I think it's a great idea to have parents and grandparents tested too. I'm wondering how much convincing I'll have to do. :-)

I too am surprised that more people don't do it. Maybe they're put off by the price, but it has come down considerably in the last few years.

Thanks again for reading and sharing. :-)