Learning From A Living Legend 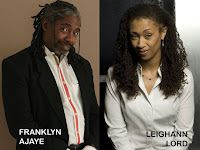 There are almost no words to describe what it felt like to watch my comedy idol, Franklyn Ajaye, take the stage Sunday night at the Laugh Lounge in New York City. I’ve been a fan of his even before I became a stand-up comedian. Most people remember Franklyn from the movie "Car Wash," but I recall his comedy album, "Don’t Smoke Dope, Fry Your Hair."

I recommend his book, "Comic Insights," to young comedians all the time. It’s a useful compendium of his advice coupled with interviews with other stand-up icons like Richard Belzer, Bill Maher, and Ellen DeGeneres discussing the craft of comedy.

While I didn’t get to see George Carlin live, I did see Bill Cosby at Radio City Music Hall. He sat down in an easy chair, center stage, and the next two hours flew joyously by. I’ve had a chance to meet and work with a lot of great comics such as: Tommy Davidson, David Allen Grier, Chris Rock, George Wallace and Kathy Ladman, but Franklyn is different.

When people ask me who my comedy influences are, Franklyn Ajaye’s name is said in the same breath with George Carlin and Rita Rudner. If I may be so bold, I feel as though Franklyn and I are cut from the same comedy cloth. He is known as The Jazz Comedian. I’ve had my peers refer to me as the Maya Angelou of Comedy. (And still I rise.) I’m not exactly sure what that means, but it sounds better then being called the Snookie of comedy.

I was convinced more than ever of our common comedy lineage when I watched Franklyn close the first show on this year’s New York Underground Comedy Festival. Unassuming in dread locks that are now more salt than pepper, dressed in a Bob Marley T-shirt and blue jeans, he was the epitome of smooth, and confident. His performance was effortless, unharried and unhurried. He is not the comedy snack our palates have been ruined by. He is the full course meal.

Franklyn began doing stand-up in the 70s. He cites Robert Klein as one of his influences (of course). He’s from a generation when comics didn’t just tell jokes. They crafted routines. Back then, they got seven minutes on "The Tonight Show." Seven minutes! Today we get four.

In an all too brief set he talked about getting older, the American and Russian economies, being a Columbia law school student, doing undergrad at UCLA . . . all to an audience that had already seen 90 plus minutes of comedy. And yet they sat riveted, hanging onto his every word. (And I’m not just talking about the other comics who crowded into the room to watch a master at work.)

I can’t speak for all my peers, but for me Franklyn Ajaye’s performance was validating, empowering and instructive. I saw the elder statesman of bring-your-brain comedy. It was inspiring to watch my comedy hero remind me of the type of comedian I want to be when I grow up.

Leighann Lord is a stand-up comedian, who's style is best described as "Thinking Cap Comedy." She is performing with Franklyn Ajaye on the Attention Span Comedy show at Gotham Comedy Club on Wednesday, August 18th. For tickets go to http://www.gothamcomedyclub.com/ or http://www.nyucf.com/ Check out herother upcoming shows @ www.VeryFunnyLady.com. Join her on FaceBook. Follow her on Twitter.
Posted by Leighann Lord 1 comment: Links to this post 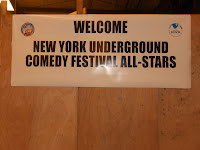 One might get the impression that I travel around the world not to do stand-up comedy, but to meet and be photographed with adorable dogs. Alas, that’s just an extremely cool bonus. I was on tour to entertain military personnel stationed in Europe. The folks at USAG Schinnen set the bar pretty high, not just with Jazzebelle, but with their warm and generous hospitality. On our first night, MWR Host Melissa made us two huge pans of delicious lasagna. 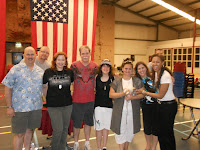 We devoured the first and put the second in the refrigerator on our tour bus. Oh, did I mention we had a tour bus? Just when I thought the military couldn’t top travel by Black Hawk helicopter, they broke out a tour bus for us to roam around Europe in. My diary entry for that day: “I feel like a rock star!” 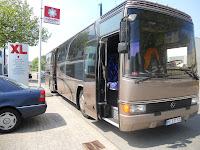 The bus had four beds, one bath, refrigerator, sink, comfy seats, a couch 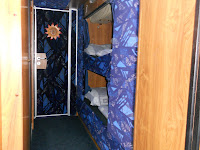 and a driver; a young man with from East Germany with blond dread locks named, Ricko. While not hard on the eyes, Ricko strongly favored one of the bad guys in “Taken.” 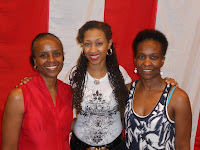 Our first show was a blast. It was my honor and delight to meet the two folks in command (at the time) at Schinnen: Lt. Colonel Fern Sumpter and her right hand, Command Sargent Major Mary Brown. I am in awe of military women. I feel a kinship with women who choose to work in a male dominated arena. I would’ve loved to have talked to them about their careers and the challenges they faced rising through the ranks, but I contented myself with making sure I got a photo. There’s just something about a woman who knows her way around an M16.

Leighann Lord is a stand-up comedian, who's style is best described as "Thinking Cap Comedy." If comedy were music, she'd be Jazz. She's George Carlin if he'd been born a Black Woman. Check out her upcoming shows @ www.VeryFunnyLady.com. Join her on FaceBook. Follow her on Twitter.
Posted by Leighann Lord No comments: Links to this post