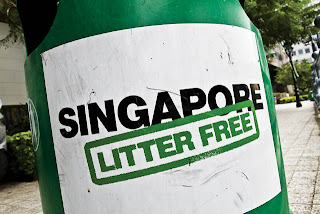 My work entertaining the troops recently took me (and the New York Underground Comedy Festival All-Stars) to Changi Naval Base in Singapore. Who wouldn’t want to visit the country that's featured in almost every episode of National Geographic’s Locked Up Abroad? "Tune in next week when an American goes to Singapore and does something stupid. Again." Do you remember, Michael Fay, the American kid who got caned for vandalism back in 1994? Singapore isn’t exactly soft on crime.

The customs and immigration form I filled out on the flight said, in big bold letters, “DEATH TO DRUG TRAFFICKERS!” Not a lot of wiggle room. They don’t care why you’re dealing drugs: Death! They don’t care about what kind of childhood you had: Death!; What kind of medication you may or may not be on: Death! There’s no plea bargain, reduced sentence, or time off for good behavior from Death!

Singapore is called a “fine” city not only because of its commitment to cleanliness but because of the myriad of seemingly innocuous offenses for which one can be . . . well . . . fined.
• Eating and drinking in public? Fine!
• Jaywalking? Fine!
• Spitting? Fine!
• Gum Chewing? Fine!

Singapore is sweating the small stuff.

It was tough to refrain from jaywalking, the birthright of everyself-respecting Native New Yorker, but no gum chewing? That was really difficult. I chewed gum all through Catholic school and never got caught. But I’ve been out of school for a while and have grown accustomed to chewing at will. If the nuns caught you in the act of mastication, they made you put the gum on your nose. Yeah, that’s exactly what Jesus would do. Singapore is a bit more punitive with a $1,000 fine and possible imprisonment. You’re not even allowed to bring gum into the country. The penalty for gum trafficking: Death? No, but the $10,000 fine is rather killer.
So unwilling to risk a “Locked Up Abroad” episode, I divested myself of my gum stash. I considered hiding a pack or two in my suitcase, but I worried that they might have gum sniffing dogs at the airport. My dog, Rolie, could easily do that job. He’s the reason that I don’t leave my purse on the floor. On more than one occasion I’ve seen him neck deep in my bag like a pig rooting for truffles. And yes, he’s figured out how to work the zipper. He’s a crafty little cur.
Even if I had managed to smuggle gum into Singapore, I would have been too afraid to chew it. Are the cops on the look out for people with minty fresh breath? Does Singapore have chew cams strategically placed around the city to catch careless bubble blowers in the act? I just couldn’t risk it. And besides, Altoids aren’t so bad once you stop wondering why they’re so “curiously strong.”
But I half hoped, half feared that I’d be approached by an illegal gum dealer: "Hey Girl, whatchu want? I got Bubble Yum, Bubblicious, Hubba Bubba! I'll hook you up, Boo!" But just my luck, he would’ve been an undercover cop.

To be clear, Singapore isn’t run by fascist dentists. They’re more like over zealous neat freaks. The No Gum Chewing edict preempts those who would spit out their gum in the street rather than throw it in the garbage. But it just goes to show, “weapon of mass destruction” is a relative term. Perhaps Singapore never considered sending troops to Iraq because Saddam Hussein wasn’t stockpiling Juicy Fruit. He didn't have any weapons either but that's another story.

Leighann Lord is a stand-up comedian, who's style is best described as "Thinking Cap Comedy." If comedy were music, she'd be Jazz. Check out her upcoming shows @ www.VeryFunnyLady.com. Join her on FaceBook. Follow her on Twitter.
Posted by Leighann Lord No comments: Links to this post

I Can Explain, Officer 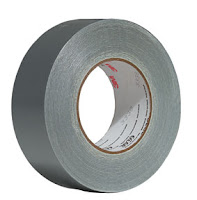 Air travel is convenient but not always enjoyable. A long time ago in a galaxy far, far away, flying used to be fun. It was like going out on a date. You got dinner and movie. Now it’s like a one night stand. You slink away from airport security with your clothes in one hand, your dignity in the other thinking, “I have got to stop doing this.”
I guess I’m what you call an expert frequent flier. I know how to play the Airport Security Theatre Game. Post 9/11 my liquids are less than three ounces and placed inside the requisite one quart plastic baggie. For this I’m sure the folks at Ziploc® couldn’t be happier. Just when the Green Movement was about to put a real dent into their business, National Security stepped in and boosted their bottom line.

My lap top is out and placed in a separate bin. Legacy of the Shoe Bomber, my shoes are off and placed on the conveyer belt, though this seems to be a strictly North American measure. Other countries not only do not ask you to take your shoes off, but they have big signs asking you, in fact, to please keep them on. Trained and confused American travelers ignore this and persist in shambling through security in their stocking feet. And I’m sorry, but not removing my belt gives me a deep feeling of satisfaction ever since I bought a plastic buckle just for the occasion.

I have yet to experience the latest device devised to violate my privacy in the name of safety: the airport scanner that can see through your clothing and snap a picture of you in your all togethers. We travelers are assured that the images are viewed by an officer of the same gender. Don’t ask, don’t tell right?

I suspect that The Powers That Be are woefully and wilfully ignorant on matters of gender and sexuality. Do I have the right to ask the sexual identity/preference/proclivity of my screener? I, of course, think people should enjoy their work, but only up to a point. If I were a Lesbian, would I have the right to ask that my screener be male? And what about Transgender travelers? This could get hairy in a hurry.

We are also told that our screened images will not be saved but immediately deleted. Hmm, like the finger prints a police department keeps on file when it shouldn’t? Like cases that are sealed by the court but are conveniently opened when it suits the "proper" authorities? Am I saying I don’t trust my government? No, of course I trust my government. I don’t trust the fallible human beings who are running it.

And so I do everything I can not to be touched, talked to or looked at too closely by Airport Security. But this is not always possible. On a recent trip I realized that I have things in my carry-on that might, out of context, look suspicious to the hyper-vigilant, security-conscious observer, thus attracting the attention I so desperately try to avoid. But to be fair, if I didn’t know me, I might be suspicious, too. I mean, why would anyone travel with duct tape, rope and a flashlight?

Hold on. I can explain.
I’m always cold. The first thing I do when I get to my hotel room is check the thermostat and set it to what I believe is a livable level. Ideally this is 78 degrees, 80 if I’m particularly chilly. In some places though, the thermostat is just for show. You can fiddle with it all you want, the temperature’s not going to change. Calling the front desk doesn’t help either. Despite assurances they’ll send someone “right away” to fix the problem, I’m never sure if they mean me or the thermostat. I prepare for this by packing duct tape. A few strategically placed strips over a vent, blocking off an arctic blast and voila! Thermostat be damned.
And what about the rope? I can explain that, too. People aren’t the only ones judged by the company they keep. Inanimate objects are too. Duct tape by itself is a useful household item. So is rope. But in close proximity they conjure up every stereotypical -- and yet well deserved -- image of The Young Serial Killer about town. Rope can’t be seen in the company of tape without causing eyebrows to raise, hearts to pound, and cops to be called.
But I’m not carrying killer rope. I’m simply carrying a jump rope. It’s an easy portable work out that I can take with me anywhere. Unlike a yoga mat, a jump rope fits into my carry-on bag instead of being counted as one. Besides, female serial killers usually tend to favor poison . . . or so I’ve seen on "C.S.I."
Flashlight? To find my secret bunker in the woods? No, of course not. The Girl Scouts’ motto is “Be Prepared” and the “X-Files” motto is “Trust no one.” Savvy travelers can’t go wrong keeping both in mind and a portable flashlight in hand; for the road less traveled is sometimes very dark.

I guess what I don’t have an easy answer for is why I also have a Teddy Bear in my bag.

Together with the duct tape, rope and flashlight, my gender is the only thing keeping me from fitting the pedophile profile. But Linus had a blanket, Ford Prefect had a towel, and I have a Teddy Bear. His name is Bear and thoughts of traveling without him lead to mild panic attacks, so there’s always room in my bag for him. He's my little bit of home. Bear makes the going . . . well . . . bearable. But thankfully, Airport Security has never asked about him.
I work a lot on cruise ships so it’s worth noting that Seaport Security, while not as streamlined as Airport Security, is no less intrusive. Without the fancy scanning equipment I’m treated to a pat down (that feels more like a rub down) and a hand search of my carry-on.

Last time, to my horror, the officer who went through my bags did so sans gloves. The germaphobe in me was nauseated. The last straw was watching him put his unwashed paws on my Teddy Bear, but it taught me a valuable lesson. Next time I'll be ready with a second Ziploc® baggie containing a Handi Wipe and pair of gloves that I can offer the officer for our mutual protection.

A little much? Perhaps. But I don’t know where he and his hands have been, and he lacks that reciprocal information about me. My hometown (New York City) is currently in the grips of a serious bed bug epidemic in my hometown. Who’s to say they don’t love a man in uniform? More to the point, would you trust a total stranger roaming around with rope, toting tape and a Teddy Bear? I sure as hell wouldn't.

Leighann Lord is a stand-up comedian, who's style is best described as "Thinking Cap Comedy." If comedy were music, she'd be Jazz. Check out her upcoming shows @ www.VeryFunnyLady.com. Join her on FaceBook. Follow her on Twitter.
Posted by Leighann Lord 2 comments: Links to this post