Quote of The Month: April

I thought you did a great job. I liked your writing, I thought your act was well thought out and delivered in a great, easy to listen to, style. I particularly liked your use of simile and metaphors. Keep up the great work, and don't totally forget me when you become famous.
-- D. Walker, Fellow Comic

***************
Okay, the English major in me may be biased, but how do you not appreciate a compliment from someone who admires your use of simile and metaphor?
Posted by Leighann Lord Links to this post

Okay. You blew it. If you weren't in the house last night, 4/26, at Raga, you missed one helluva show. Chicks & Giggles absolutely rocked the house last night. I'm not saying that because I was on the show. :-) But I shared the stage with some truly funny, talented and supportive women. Each of them did their best to ruin the stereotype that women aren't funny.
Posted by Leighann Lord No comments: Links to this post

I Won The Comedy Social Joke Off

FROM THE COMEDY SOCIAL WEBSITE: "Each week, featured comedians are given the same news headline and asked to create the funniest and most original punch line. The audience chooses the winner."

And yours truly won last week. I'm mentioning it now, because it's just been posted on the Comedy Social site. Click on The Comedy Social Joke Off to read the winning joke.
Posted by Leighann Lord No comments: Links to this post

The Dessert Table in Heaven

Last Thursday I performed for a Ronald McDonald House Volunteer Appreciation Night in New Haven, Connecticut. The wonderful and dedicated volunteers were appreciated -- in part -- with a chocolate fountain! It was absolutely yummy, I had to take a picture! I do believe this is just a sneak peak of what you get when you go to heaven. 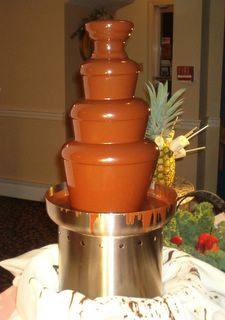 Yes, I've been a little lax in my posting. Spring is in the air, a new Pope is on the thrown and I've just been out enjoying this run of fabulously warm weather we've been having.

I was hoping an American would ascend to the papacy, but with all the scandals it's far more likely they'd choose the Dali Lama, with the Ayatollah as back up.

But Pope Benedict the 16th is 78 years old. Something tells me we may be getting a new pope before the decade is out.
Posted by Leighann Lord 1 comment: Links to this post

On Thursday I performed at Café 7, a wonderful little coffee shop in uptown Manhattan that does a weekly Comedy and Poetry show (Show Schedule). It’s a great place to try new material in a cozy and supportive environment.

When I walked in, the emcee, Kim, asked me when my birthday is (September 2nd). I thought, ‘Hey, more presents? Cool.’ But alas, no. Very cleverly, Kim told me that akin to zodiac signs, birthdays correspond with what kind of tree you are. So I was introduced on stage as being a pine tree. And I quote (with commentary):

"Pine Tree: The Particular. Loves agreeable company (who doesn’t), very robust (I guess like steak sauce); knows how to make life comfortable, very active, natural, good companion, (I try) but seldom friendly (let’s keep that our little secret). Falls easily in love (sigh) but it’s passion burns out quickly (double sigh). Gives up easily (only when things are hard, inconvenient or uncomfortable). Everything disappoints until it finds the ideal, trustworthy, practical. (It’s not easy being a perfectionist.)"

This is, without a doubt, the most creative introduction I’ve ever had. I kinda dig it. Pine trees are tall, elegant and smell good. Who needs tv credits? 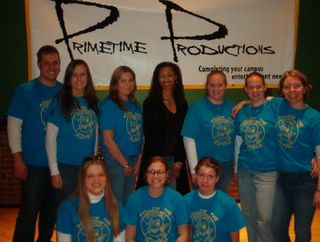 Me & Primetime Productions, the student activities crew at Northern Michigan University in Marquette, MI
***********************
Saturday, April 2nd: With a full house on a beautiful spring day in the UP (Upper Pennisula), my last scheduled college show of the season was a great success! The Primetime Productions crew did a great job promoting the event and I really enjoyed their very gracious hospitality. It was a schlep, but it was worth it.
www.leighannlord.com
Posted by Leighann Lord No comments: Links to this post 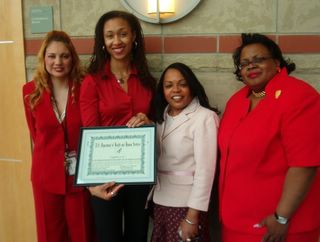 Jennifer Canale (Coordinator), Me, Claire Nicols (my sorority sister). The lady on the end was the winner of FDA's Phenomal Woman Contest.
I was invited to participate in the FDA's Women's Day Program last Thursday, March 31 and I had a blast! The color of the day was red, my favorite; and best of all it was 10 minutes from my house! At the end of my performance they presented me with this beautiful award! It doesn't get better than that!
Posted by Leighann Lord No comments: Links to this post

Where’s that? 455 miles north west of Detroit. Almost a thousand miles from home. I am out here; or up here. I could sneeze on a Canadian and hear them say God bless you.

They get about 250 inches of snow a year in Marquette. Some of it is still on the ground. On the ride in from the airport I saw people skiing. I’ve never been skiing in my life. Oh I’ve been on a ski trip or two, but I’ve never "hit the slopes." It’s not a "Black thing." It’s a "I-hate-cold-weather-sports-and-possibly-breaking-a-bone-thing." Steve, the shuttle driver, told me that’s there’s a group of skiers who come every year with their own crutches. I don’t know if that’s smart or pessimistic.

The people here are really nice. It’s like a small southern town with snow. "Everybody know’s everybody here and the crime rate is very low. Almost non-existent," said Steve. I believe it. If something ever was stolen, they’d probably know exactly who did. "Okay Bob, give it back."

For the record, my cell phone has no idea where I am. It’s been searching for a signal ever since I left Detroit. Instead of signal bars, I’ve got an icon of a little man scratching his head, looking at a map in consternation. And in case your wondering. My phone worked just fine in the Bahamas. I guess T-Mobile doesn’t like the cold either. 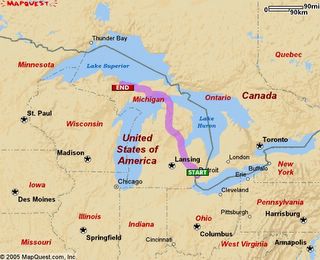 Not Bad For On The Fly 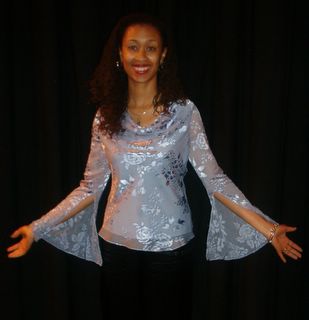 Showtime on the Carnival Valor
American Airlines lost my luggage and I joined the Carnival Valor in Nassau with only the clothes on my back. On board ship for three days and no clothes, it was off to the on board gift shop. I thought I'd be doing my shows in a sweat suit, but being the newest ship in the Carnival fleet, the on board stores actually had some pretty fancy duds. The black silk pants blend into the background, but how about this top? The sleeves have pretty little sparkly things on them. Spiffy, eh?
Oh, by the way. I still don't have my bag. I lost it on Monday. Today is Friday.
(My wrath will be legendary. Hell hath no fury like a woman separated from her wardrobe.)
Posted by Leighann Lord No comments: Links to this post