Teeing Off With The Gob Stopper 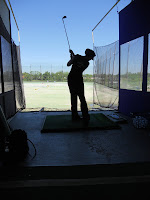 I don’t know anything about golf. Well, that’s not true. I know that adulterous scandals notwithstanding, Tiger Woods has made the sport perplexingly popular. I also know that I’ve actively despised golf ever since I was forcibly exposed to it in high school. On the unwanted gym class scale, I’m not sure what I hated more: track, square dancing or golf. Hmm . . . golf.

So it is in rather surreal astonishment that I find myself going to a driving range. My husband has recently taken up golf. Even after nine years of marriage I still dig the guy and like doing things with him, so I’m golfing. Well, I haven’t actually had to go to a golf course yet. That would cut into my mall time.

At my first outing to the range I was content to sit on the bench and watch my Husband hit the ball.

“Do you know which club you want to use?”

“Really?” he said, impressed with my quick and decisive response. “How come?”

I’ve never watched a golf match, so the best I could do was imitate what little I could remember from Caddy Shack. Let’s just say my form was a little off. I swung the club like it was a baseball bat. And it would have been a home run if I had actually hit the ball. Swing and a miss.

“Ok: bend your knees, keep your eye on the ball and line it up with your left nipple.”

So that’s why men have nipples. I was still missing the ball, but now I looked better doing it.

I barely passed golf in high school, and my Husband hasn’t played since the Clinton administration. Watching us futz around with our discount Craig’s List clubs must have been very painful for the older gentleman in the bay next to us. Despite posted signs that say “No Teaching” he came over to give us a few pointers. He didn’t mention the nipple thing but he did tell us to stop bending the left elbow.

A few more practice swings and I actually began connecting with the ball.

“You’re pretty good at this,” my Husband said.

Of course I am, I thought, because I have no desire to be. I only went to the range to spend time with my Best Guy, but I have to admit there is something surprisingly satisfying about hearing the loud thwack of the club against the ball, and watching it sail far and away across the field. (Bonus points if it hits the ball cart.)


“Do you want to try another club?”

I’m learning that clubs have names as well as numbers indicating vitally important, and specific functions. There are drivers, putters, wedges . . . My Husband knows that I’m not bothering keeping it all straight, but it tickles him if I ask.

“Ha-ha!” I thought he was joking. “What’s that, the club you hit someone in the mouth to make them be quiet?”

And thus, my club of choice was born.

If I had any sense, I’d stop now. I know me and this could easily get out of hand. Whenever I do something, even if I don’t care much about it, I want to do it well. Such is the fate of an achievement oriented, obsessive-compulsive, workaholic, perfectionist, control freak.

For instance, I can’t help but notice the transferrable skills from my martial arts practice. True, there’s no kicking, punching, or wrestling going on at the golf range – at least not on the days that I’ve been there – but proper breathing is important.
I’m worried I might start drawing comparisons to other sports I enjoy, like shopping (persistence, patience, pacing). Worse, it’ll be another reason to shop. It’s all fun and games until you start picturing yourself next to a sexy red leather golf bag with matching shoes.

Yes, if I keep this up, it’ll be harder to maintain that I have no interest in golf. But what’s not to love about lining up nipple shots, and thwacking the ball with your gob stopper? My high school gym class was never this much fun.

© 2010 Leighann Lord
“You’re going where?” my parents said. They had confused and weary expressions on their faces when I told them I was going on a short (three-day) tour with Armed Forces Entertainment to perform for the troops doing humanitarian work in Haiti. Several questions brewed on their brows:
Didn’t you just get home from Iraq?
Can’t you just tell jokes in seedy night clubs like a normal comedian?
Do we still have the authority to ground you?
Yes, no and no.

Before I could baby-wipe all the dust off my combat boot style Converses, friend and fellow comedian Carole Montgomery called and asked if I wanted to entertain the troops in Haiti. Not one to let the pages in my passport go to waste, I said, “Yes.” 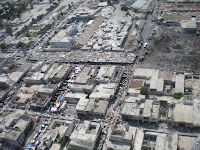 The earthquake and the plight of the Haitian people have faded from the front pages of newspapers and web sites, but humanitarian efforts are still ongoing. As part of Operation Unified Response, several branches of the United States Military went to Haiti’s aid in the aftermath of the devastating January 12 earthquake that crippled the capital of Port au Prince.

Down from a 21,000 high, those who remain are now busy relocating people to safer areas ahead of the coming rainy and hurricane seasons. The conditions are austere. The heat and humidity are debilitating. The boredom is palpable. At the end of the day they don’t return to home and hearth, but to camp and tent. 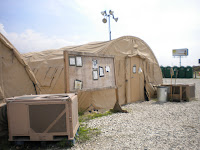 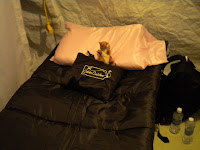 things you take for granted like a comfortable bed and privacy. The womens tent sported cots for beds and strung clothes-pinned sheets for privacy. On the plus side, our tent was one of the few with air conditioning, which kept us cool and mosquito free. I soon learned however that while 60 degrees feels good when you just walk in from the heat, it feels down right frigid in the middle of the night when you’re trying to sleep. I zipped my sleeping bag up past my ears to block out the sound of Morpheus’ chattering teeth.

The mosquito situation was serious enough to require being put on anti-Malaria medication. Malaria? Seriously? I’m so spoiled. In the Northeastern United States we’ve pretty much hunted, trapped and sprayed our bugs into submission. But in Haiti the bugs are bold. I can’t be sure, but I think one asked me out. 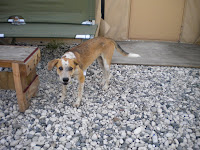 In addition to the mosquitoes, there was Maggie, a beautiful light brown, mixed-breed dog. She was nothing but skin and bones when the soldiers arrived, but the rules are very clear: no pets. So nobody owned Maggie, nobody fed her, and this same group of nobodies bought her a flea collar. Nobody was also working on bringing her back to the U.S. Maggie owns everybody.

Three-minute combat showers were the order of the day. I know 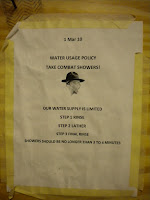 . That’s barely enough time to sing all the verses of the “Umbrella” song. But I didn’t mind a short shower especially since it was cold. I didn’t mean to take a cold shower but the water never warmed up while I was shivering under it. I wished I could have skipped it but the living conditions made good hygiene super-uber critical. And to be honest, I didn’t really enjoy smelling like an odd combination of sweat, bug repellent and hand sanitizer.

On the bright side, a cold shower makes you ask yourself life’s big, hard questions:

I don’t smell that bad do I?
Can I just use baby wipes?
Can get away with Febreezing myself? 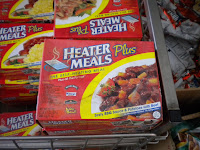 The military made sure we were fed, and we never went hungry, but it wasn’t fancy. We had at least one cooked meal supplemented with MREs (meals ready to eat), heater meals, cold cereal, and assorted snack food. I lived on apples, V-8 and Gardetto Chips while dreaming of yogurt, salad and meat I could visibly identify.

I don’t know how they managed it, but the camp’s Ladies Only 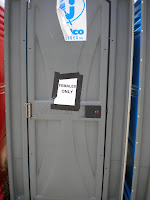 porta potty was great. Perhaps the testosterone ban had something to do with it. The Ladies’ porta potty was well lit, smelled good and had an ample supply of multi-ply Charmin toilet paper, proving once again, that where there is a woman, there is a way.

Speaking of women, I had the pleasure of working with three of the Miami Dolphins Cheerleaders. They made up the other half of The Hijinks and High Kicks (Punch Lines & Pom Poms) Tour. In the interests of full disclosure I have to admit that my inner teenager, who never got to be a cheerleader, did not want to like these women. Something primordial from the dark side of my soul assumed they’d be no more than vapid wastrels. Apparently my dark side has an extensive vocabulary.

But these women did not fit the evil stereotype at all. Yes, they were young and beautiful, but they were also smart, talented, organized and hard working. With college degrees, full time jobs and post-cheer leading career plans already in the works, I was impressed. It also helped that I was mistaken once or twice for being one of the cheerleaders, which went a long way to placating my inner insecure adolescent.

On this very short trip we did three shows, all outside, a top truck flatbeds.

The last show was at the U.S. Embassy which gave us the chance to drive through the very crowded streets of Port au Prince. We saw the poverty mixed in with the damage, so much devastation afflicted on those who could least afford it. 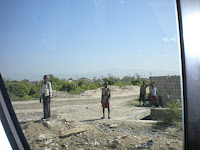 It was heartbreaking to see the Haitian children begging outside the Embassy gate for money, but we weren’t allowed to give them any. We were told the money would end up going to the “handlers,” the men who sent the kids out to beg like a real life Oliver Twist.

Humor can’t heal everything, but and for a moment I wished that I could tell jokes in Creole. “Bonswa! Sak Pase?” 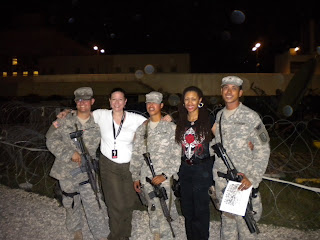 The children reminded me of what I take most for granted: my family; my amazing parents who raised me to follow my dreams, but are sometimes terrified of where that takes me. “You’re going where?” They asked me that every day for a week leading up to my trip as if the answer or my mind would change. I’m sure they’d be a lot happier if I said I was going to seek fame and fortune in Los Angeles, but L.A. scares me in a way that war zones and natural disasters don't.

Leighann Lord is a stand-up comedian. May 14 she'll be headlining at Bananas Comedy Club in Hasbrouck Heights, NJ. Check out her other upcoming shows @ www.VeryFunnyLady.com. Join her on FaceBook. Follow her on Twitter.
Posted by Leighann Lord No comments: Links to this post