“Is That Your Real Hair?” 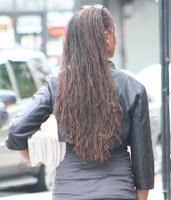 “Are Those Your Real Manners?”
“Is that your real hair?”“Are those your real manners?”

This is one of my favorite jokes in my act because in real life people ask very rude questions, and we all wish we had a snappy retort ready to go. The joke gets two reactions:

1. Knowing head nods and murmurs of approval from people who’ve been asked this crass question.
2. Dead silence from the people who are guilty of doing the asking. They feel called out and judged, and I’m glad. Sometimes comedy has the power to entertain and teach.


I’ve had dreadlocks - Sisterlocks to be specific - for almost 10 years. Even with a little trim here and there, my locks have grown quite long. At least once a year some troglodyte asks, “Is that your real hair?” And it never fails to irritate me. This question speaks volumes. If an African American woman has long hair it must be fake? Go fornicate yourself.

I know this should be a teachable moment. But I don’t know which lesson to start with first: culture literacy, common sense, or courtesy.

Believe it or not I love talking about natural hair, the locking process, the different types of locks, and can do so ad nauseam. In fact I used to do an entire blog about my locks. Because Sisterlocks are much smaller than traditional locks, I sometimes get quizzical looks from interested observers. Total strangers ask me what kind of locks I have and I’m more than happy to tell them. This most recent encounter, however, did not make me happy at all.

I had actually taken the time to curl my hair. I don’t do it that often anymore because I hate rollers, but having Sisterlocks gives me a great deal of styling flexibility. If I say so myself, I was looking cute.

A gentleman, who I know but hadn’t seen in a while said, “Wow, nice!” Then he proceeded to reach out and touch my hair — ooh that’s a no, no! Rest assured, we’re not that close. He touched my hair and said, “Is that real?”

“Yes,” I said with all the ice and venom I could muster. Mission accomplished because that’s when the stuttering and back pedaling started.

“Yes, they do.” I said, the temperature in the room still dropping. “I don’t.” The conversation ended shortly after that. But really, what else is there to say after you’ve revealed yourself to be an oaf?

Let’s say for sake of argument it wasn’t my hair. Maybe I was wearing a wig, a weave, extensions, whatever. The last thing I would want is anyone drawing attention to that. What purpose does it serve to ask such a thing out loud and in front of other people? Was it to chagrin, humiliate, detract? “Yes, you look nice but . . . ” Oh no, not on my watch. There was a time when I might have tried to laugh it off. Those days are over. I’ll not allow it. Unwarranted. Unacceptable. Unforgiven.

Very young children do this all time. They ask socially awkward questions. They blurt out whatever is on their little minds, until their parents can teach them otherwise. So you would think an adult — pushing a hard 60 — would already know better, but alas no. The social graces are on the decline but I would never think to say, “I see you have a cold sore. Is that a herpes flare up?”

I guess that’s why I love my joke so much:


“Is that your real hair?”
“Are those your real manners?”

It’s empowering. It turns the situation around. It says, I won’t let your insensitive comments diminish me. I prefer to make your ignorance embarrass you. Class dismissed.
Listen to this Post on PODBEAN
Subscribe for FREE on ITUNES

Join The Urban Erma on Facebook or follow on Twitter. You can listen to the podcast on Podbean or subscribe on iTunes. Leighann Lord is a stand-up comedian, who's style is best described as "Thinking Cap Comedy." If comedy were music, she'd be Jazz. Check out her upcoming shows @ www.VeryFunnyLady.com. Join her on FaceBook. Follow her on Twitter.
Posted by Leighann Lord

Love the post. Unfortunately I have the pleasure of having to ask women if that is their real hair all the time at the Jail. Extensions and weaves are contraband and are not allowed in the facility. So I get really bad looks all the time, but weaves are looking so real these days.