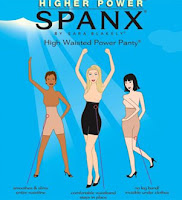 One More Thing I Can Check Off My Bucket List  ---


It’s not necessarily true that you need to experience something personally in order to write a joke about it, but it helps. I’d heard comedians (male and female) tell jokes about Spanx long before I knew what they were. I could figure out from the context of the joke that Spanx are this generation’s girdle, the poor woman’s liposuction, another tool in the arsenal to avoid diet and exercise.


I saw a package of Spanx on sale at an accessory store, and the cartoon ladies on the package looked svelte and sexy. Who doesn’t want to look svelte and sexy? Now, I know what you’re thinking. “Leighann, you don’t need Spanx" and my Ego would totally agree with you. But my Vanity said, “How could anything that ups your sexy be bad a thing?” Well, I found out.


I got my spanking brand new pair of Spanx past my ankles and knees without a hitch, but my thighs were another matter entirely. Most people don’t notice them because I’m tall, but big thighs run in my family. No one would ever call me thunder thighs (at least not to my face) but proportionally, they’re larger than you think they’d be on a woman my size.

My upper thighs are where the huffing, puffing, yanking, tugging and finessing began in earnest. At this rate, it wasn’t looking good for my ass at all.  I checked the package to make sure I’d purchased the right size and wondered if this was one of those things you are supposed to buy one size up.


I also learned that when one is wearing Spanx, there is no “holding it.” The minute you have the remotest of inklings that you think you might possibly have to go to the bathroom, don’t be a hero. Go. Your kidneys may not be that patient with the decompression process especially if they’ve been under wraps for a while. Honestly though, I’m not sure if the external force holds stuff in or squeezes it out.

The trek to the ladies room made me feel like Svelte Girl Walking. I was torn. On one hand it would be nice to be Spanx-less if only for a few minutes, but I wasn’t relishing the task of pulling them back up into position. I was very self conscious about huffing and puffing in public. It can be a bit disturbing to hear a woman grunting in the stall next to you. I didn’t want to have that conversation.

I finally got the Spanx on and immediately felt svelte and sexy. As promised, it “whittled my middle” and “tamed my tummy” What I didn’t expect was the immediate improvement in my posture. The fit was so tight, I was afraid if I slouched I’d crush a lung.

“Yup, just putting on my Spanx.”

For a moment I regretted not wearing a pair of Depends as well, but the combined pressure might have induced an explosion or internal bleeding.

It’s probably not a good idea to wear Spanx and baby powder. On a hot summer day you might be tempted to dose on a bit of baby power to keep yourself cool. But by the time you peel off your clothes at the end of the day, a not so freshly baked cake might pop out of your privates.

Now that I’ve been liberated from my Spanx, and blood flow has returned to my brain, there are things I realize now that should have been obvious before. My first clue should have been the cartoon women on the packaging. The Spanx people could never use real live women to model this product. They’d never survive the photo shoot. Human women have to actually move and breathe.

Since the Geneva Convention is silent on the use of Spanx, they could easily become a useful tool of interrogation. “Come on, Hassan. You either tell me what your cell is planning or you’re putting on the Spanx.”

I’ll take a little of the blame here and say that maybe Summer wasn’t the best time to run the Spanx experiment. Perhaps they are best worn as a sexy pair of long johns.

In the main though, this is all Vanity’s fault. Vanity says things to me that I’d slap a stranger for. It says things about the little pooch under my belly button that it turns out is totally normal if you’re a real human being and not an air brushed photo in a magazine. But I should know better. I should know that Vanity doesn’t always have my best interests at heart. Did I learn nothing from the Great Glitter Catastrophe of 2004? Apparently not.

Here’s what I won’t forget: after a day wearing Spanx, it might actually just be easier to do some sit ups, watch what I eat and tell the government everything my cell is planning.

Join The Urban Erma on Facebook or follow on Twitter. You can listen to the podcast on Podbean or subscribe on iTunes. Leighann Lord is a stand-up comedian, who's style is best described as "Thinking Cap Comedy." If comedy were music, she'd be Jazz. Check out her upcoming shows @ www.VeryFunnyLady.com. Join her on FaceBook. Follow her on Twitter.
Posted by Leighann Lord