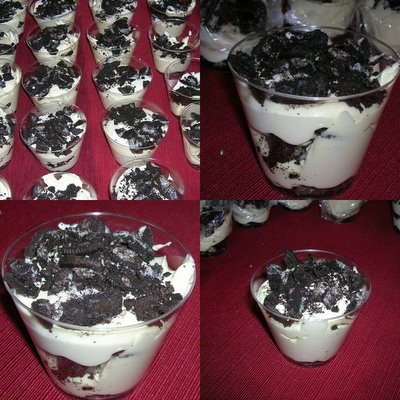 If you're really good, Santa brings you a cup of Oreo Cookie Bash! I guess I was really good then, because my husband Jim made it for Christmas. Actually he's been making it every other week since Thanksgiving because I LOVE the stuff.

I had it for the first time back in September at my cousin's baby shower. The lady who made it was kind enough to share the recipe with me. Okay, I begged, whined and damn near threatened her, but hey: It's THAT good.

It goes by many names: Cookie Pudding, The Cookie Monster... whatever you call it, it's delicious! In the spirit of the season, here's the recipe. Don't say I didn't warn you:


Recipe for Oreo Cookie Bash
1. Crush 1 1/4 lb of Oreo's- set aside
2. Cream 1 stick butter, 1 8oz pkg of cream cheese and 1 cup powdered sugar
3. Mix 3 1/2 cups milk and 2 pkgs of French Vanilla Instant Pudding and 16 oz. Cool Whip
Mix #2 into #3 and beat together- refrigerate to set. Once set, use a trifle bowl and start layering with Oreo cookie crumbs, then pudding then Oreos, etc.
Start and end with Oreos!
Enjoy! 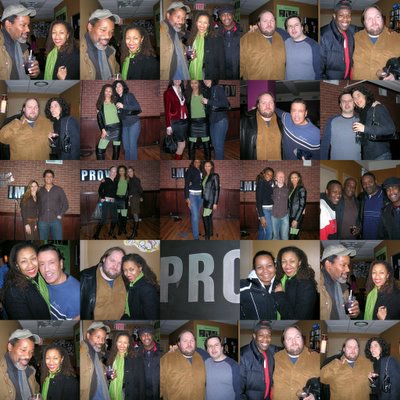 Friday night on stage at Rascals Comedy Club in Montclair, NJ, I asked,
"Hey, any Law & Order fans?"
A woman right up front loudly and proudly answers,
"Yes, I watch SUV!"
"That's nice. But I think the rest of us are watching
SVU (Special Victims Unit)."
Some nights it's like taking candy from a baby.
Posted by Leighann Lord No comments: Links to this post 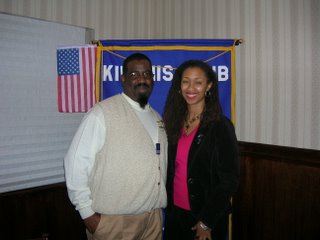 Robert Witherspoon, President & Moi
Right after Old Business and before the Closing Remarks, I was the Surprise Guest at a local meeting of the Kiwanis Club of Rosedale - Laurelton!

It's not often that I get to do a gig less than 10 minutes from my house. My shows usually involve the accumulation of frequent flyer miles. But last Tuesday I was local with an intimate group of about 20 very warm, friendly and receptive people! They weren't expecting an impromptu comedy show, but they didn't hold back.

A visiting member was so impressed, he invited to perform in February for the Official Visit and Brunch for Kiwanis International's New York District Governor! Cool, huh?
Posted by Leighann Lord No comments: Links to this post

Richard Pryor, the original King of Comedy, passed away on Saturday, December 10th, and our hearts go out to his family. My husband Jim said it best:

No words can convey the sorrow that we all share at the passing of one of the true artists of the stand-up stage, Richard Pryor. Pryor is the most idolized, imitated, and plagiarized comic of all time. He was perhaps the first comic to use his private pain for comedic effect, and by doing so showed the generations of comics that have come after him a new way of being funny -- that is being real. He remains the bar by which all other comics measure their artistry. This is a true loss for all who cherish laughter. Richard Pryor will always be remembered, and forever be missed, by those who were touched by his laughter.
--- Jim
Posted by Leighann Lord No comments: Links to this post

In the wake of the London subway bombing the authorities in New York City have seen fit not only step up their security measures, but to enforce a "broken windows" policy on the riders. No walking in between cars. No eating. No drinking, and certainly no taking up more than one seat. Do riders of girth have a case here? Perhaps, but they’ll have to wait in line behind the people who have been the subject of the oh so successful and constitutional random bag searches. 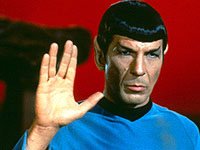 Mr. Spock (Yes, I’m an unabashed Star Trek fan), once said, "The needs of the many, outweigh the needs of the few or the one." That may be true, but I have often found that, "The crimes of the few, infringe of the freedoms of the many." This isn’t really new. I learned this lesson in grammar school. It was usually the actions of only one kid who would cause the whole class to be kept after school or to receive extra homework as punishment.

I vociferously rebelled against this in seventh grade. Our teacher, Mr. Powers, had to step out of the classroom for a moment, and asked our Catholic school class of 28 to continue quietly with our work. You would think 12 year-olds could accomplish this. Well, some of us could. But for Billy the temptation proved too great. He just had to leave his seat and cause as much mayhem as two minutes of freedom would allow.

Mr. Powers heard the commotion from the hallway and matched it with his own. He came in, clearly disappointed, and levied detention and punishment on the whole class. This irked me and inspired a sense of injustice that only a kid can muster. He knew who the culprit was, and yet he condemned us all. I balked. I had done what I was told. I had stayed in my seat and done my work. Why was I being punished? It wasn’t fair! It was however a perfect example of the real world. The crimes of the few.

So while we all adjust ourselves to a new set of rules and regulations, necessitated by the crimes of a few, perhaps the MTA should be even more specific. If you’re gonna regulate all areas of behavior, do it right. They left a biggie off the list: No menacing. I don’t know if a sign with that commandment would have helped, but it may have been of some comfort as a tall, shabbily dressed man menaced the people in my sparsely populated subway car.

He stopped and stood in front of a man in a trench coat sitting across from me, reached out and ruffled his hair. That caught my attention. You don’t see that on the subway very often. I thought perhaps the men knew each other. But even as I thought it, I knew I was wrong. The menacing man began talking to and touching Mr. Trench Coat who was trying desperately to ignore it, as if ignoring it would make it stop. Not only was Mr. Menace not stopping, he was standing in such a way as to block Mr. Trench Coat’s means of egress.

The clincher that all was not well, as if any other sign was needed, was the woman sitting across and a couple of seats over from the action. She was still holding her book open, but she wasn’t reading anymore. She was staring at the interaction between Mr. Menace and Mr. Trench Coat with a mixture of disgust and fright. I’m sure I probably had the same look on my face.

As the F train slipped into the 34th street station and the doors opened, Mr. Menace stepped back, his attention momentarily caught elsewhere. Seeing their opportunity, Mr. Trench Coat and the Book Lady bolted. As I stared after them, part of me hoping that I hadn’t just seen what I had – the mind’s capacity to rationalize is infinite – I realized suddenly that I now had Mr. Menace’s attention. He introduced himself by reaching out to touch my hair.

No ignoring or rationalizing that. I was out of my seat and out the door. Exit stage right. Now there was a good chance this man was simply a poor soul who is off his medication, but I was pretty sure I didn’t have his prescription in my bag. I also don’t give the benefit of the doubt to grown men who are taller, inherently stronger and outweigh me by 100 pounds.

As the train doors closed with Mr. Menace inside, I felt like the gazelle who got away. I looked around and saw the Book Lady next to me. The other man was no where to be found. He was probably turning in his metro card and opting for a cab. Who could blame him? I would have too, but catching a cab at 34th Street, mid-day during the holiday season is murder. And I’m cheap. I paid $2 for a subway ride and I was going to get my money’s worth. The MTA doesn’t do refunds. I just waited for the next train.

In the old days we all could have just thrown our open hot cups of coffee on Mr. Menace as a distraction as we hustled through the doors at the end of the car to the next. Or if things got ugly, pummeled him with our overstuffed back packs. But that’s against the rules.

Signs abound urging passengers, "If you see something, say something." But there was no one there to say anything too. No one in authority anyway. The cops were probably too busy with their hazardous duty of issuing summonses to coffee drinkers and seat sprawlers. And like I said, menacing is not on the list.
Posted by Leighann Lord No comments: Links to this post