Although I’m a dog lover, I have to confess Chihuahuas are near the bottom of my list. It only takes one dog to mess it up for the entire breed and for me the culprit was Chico. When I was a kid, Chico the Chihuahua technically lived across the street from us but he roamed the neighborhood with impunity, terrorizing everyone. Most people look both ways before crossing the street. We looked both ways before crossing Chico.

This dog was beyond the help of Caesar Milan, The Dog Whisperer. Chico would have ripped his heart out and peed on it while it was still beating. I remember riding on the back of my mother’s bicycle, Chico in hot pursuit. And I was very well aware that if my Mom didn’t out pedal him, I’d be the first one he’d sink his terrible tiny teeth into. That sort of thing scars you for life. I won’t even watch reruns of "Chico and The Man." 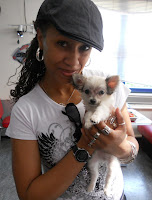 And then I met Jazzebelle.

I was at U.S. Army Garrison Schinnen in The Netherlands, the first stop on my recent European tour with Armed Forces Entertainment. As my tour mates and I were walking on base, my doggie senses started tingling. A short distance away, romping through the grass, was a white ball of fluff so small I thought it was a Tribble. My friend Carole (tour mate and fellow dog lover) and I were both instantly smitten.

"Awwwww! How cute! How adorable! She’s a 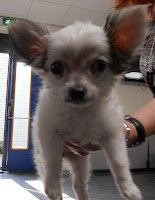 what? No way!" Three-month-old Jazzebelle is a long-haired Chihuahua? "Say it ain’t so." She looked nothing like my memories of the Terrible Chico who had the body the Taco Bell dog and the disposition of Charles Manson. Jazzebelle was sweet and friendly.

Jazze’s parents, Bianca and Richard, were two of our MWR (Morale, Welfare & Recreation) hosts. They were very patient with us as we took turns holding Jazze and acting like puppy paparazzi.

I have a beautiful dog at home. A rescued Cocker Spaniel named, Rolie. I love The Old Man, but I’d be lying if I didn’t admit I wished we’d had him from a puppy. I fantasize that starting out in a loving home might have alleviated some of his neurotic behavior (separation anxiety, lack of interest in toys, morbid fear of German Shepherds, a steadfast air of entitlement; okay the latter might be my fault) but maybe not. All the same, before we found Rolie I was hoping we’d get a puppy, a small dog; not a pursed-sized pooch but something that weighed less than a cranky American toddler.

Jazzebelle was very tiny, a scant three pounds. I was very nervous the first time I picked her up since she was smaller than any baby I’ve ever held. I was terrified that I’d drop her but I learned once you picked her up you never wanted to put her down. 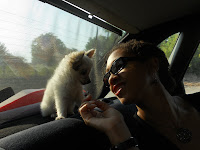 But watching Jazzebelle run was just as much fun as holding her. She’d get a good gallop going and be nothing more than a blur of fur. Reminiscent of Chico, but in a good way, Jazze seemed to have no idea that she was a small dog. A fearless explorer, she climbed up – unaided and catlike – into the back window of Richard and Bianca’s car. It was there that Carole snapped one of my favorite pictures of the tour: me and Ms. Jazzebelle in the mutual admiration society. 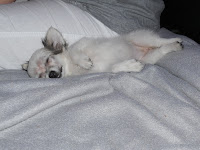 My image of Chihuahua’s stood redeemed.

I don’t know what happened to Chico. His family eventually moved but no one assumed that Chico would be leaving too. He was a free range dog who did as he pleased. His family was probably moving to get away from him. Come to think of, I think they relocated to Europe.

Leighann Lord is a stand-up comedian, who's style is best described as "Thinking Cap Comedy." If comedy were music, she'd be Jazz. She's George Carlin if he'd been born a Black Woman. Check out her upcoming shows @ www.VeryFunnyLady.com. Join her on FaceBook. Follow her on Twitter.
Posted by Leighann Lord No comments: Links to this post

Hanging with Hugo in the Former Yugo 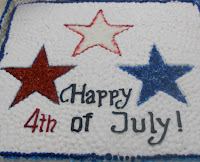 It’s easy for the Fourth of July to go by in a blur of beer, barbeque and fireworks, but I never thought I’d have the best Fourth ever 4,625 miles away from American shores. My recent tour for Armed Forces Entertainment culminated with a final show at Camp Bondsteel in Kosovo. If you’re wondering where that is think The Balkans, or for you history buffs, The Ottoman Empire. 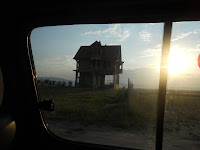 Currently, Kosovo – comprised largely of Albanians – is one of the poorer countries of the European Union. On the 45-minute drive from the airport in Prishtina (the capital) we saw a lot of houses without windows making the country look like a nation under renovation. “People live there,” said our MWR (Morale, Welfare & Recreation) Host, Jay DuBouse. “They have to start paying taxes when the windows go in.” So, if you hate doing windows and paying taxes, this may be the spot for you.

Be warned though, the commute’s a bit rough especially if you fly Air Berlin, or as I like to call it, The Greyhound of the Skies without the charm. The boarding process was Carribean flavored. Instead of calling passengers row-by-row they simply said, “on your mark, get set, go.” At least that’s what I think they said. I can’t be sure since the one and only announcement was made in German. I took Spanish in High School, so my knowledge of German begins and ends with schnitzel and Hitler, and too much of either is not good for you. 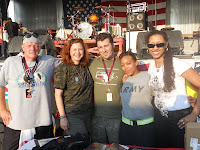 So I and my tour mates* took our cue it was time to leave when the boarding area erupted into a marathon with carry ons. The running of the bulls in Spain now seems tame by comparison. (*Dave Parker, Carole Montgomery and Mark Riccadonna.)

The next day, however, was July Fourth and MWR at Bondsteel put on an absolutely fabulous Big Ass Barbeque. Although far from home, the menu was full of familiar American fare: hamburgers, hot dogs, chicken, ribs, potato and macaroni salad, bratwurst . . . Okay, bratwurst isn’t very American, but no complaints from moi, not when there was also sweet tea. Wunderbar! 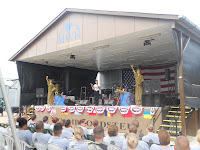 Festivities included volley ball, vendors, music, a base talent show and of course, comedy. I was a little worried about the show since Bondsteel is a mixed base of both U.S. and NATO soldiers. Much to my delight though, the Danish soldiers enjoyed my Swedish massage jokes. 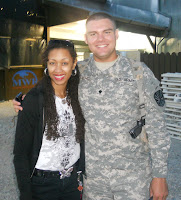 After the comedy show we were treated to the wrap up of the Camp Bondsteel Talent Competition. I’m not a flag-waving xenophobe, but I’d be lying if I said I didn’t tear up when Specialist Raul Sanchez opened the show by singing The Star-Spangled Banner. What a voice! And he wasn’t even a finalist! The three soldiers who were took the stage with a level of talent and showmanship that put American Idol to shame. Respectively, the men sang, Hello, Pour Some Sugar on Me and the winner did a rendition of Sexual Healing that would have made Marvin Gaye um . . . gay.

The only things missing from the BBQ were alcohol and fireworks. I know I just lost some you hard core swillers, but Bondsteel is a dry base. The good news was, you could have all the non-alcoholic beer your bladder could handle, which was jokingly referred to as “Near Beer,” tasting no where near it at all.

I missed seeing fireworks, but I could certainly understand – on a base sporting posters of what to look for in a land mine – why explosions as entertainment weren’t such a good idea. Besides, the combination of alcohol and fireworks usually doesn’t end well, as I’m sure you cherry bomb amputees out there will agree. 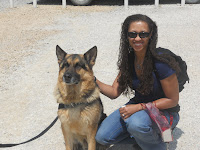 Psycho Dog Lover that I am, I really enjoyed meeting, Hugo, one of three members of Camp Bondsteel’s K-9 Unit. You wouldn’t know it to look at him, but the Handsome Hugo is eight years old. That’s geriatric for a military dog, but I think Camp Bondsteel is Hugo’s retirement gig. Clearly the camp favorite, he couldn’t walk more than three feet without someone coming over to chat, pet him, or give him a treat.

As we dined at the BBQ with our other MWR Host & Camp Mom, Renee Favors, we watched her share pieces of chicken with Hugo. When she wasn’t feeding him fast enough, he barked loudly as if to say, “Hurry up, Woman! I’m not getting any younger!” 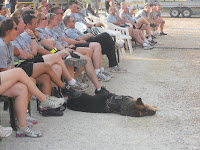 Hugo came to the show and sat right in the front row, or rather napped there. I didn’t take it personally. He’d had a really busy day. Who wouldn’t need a nap after all that chicken?

After the show, the Base Commander called all the comedians back out on stage to thank us for our service and gave each of us a plaque of appreciation and a set of commemorative dog tags, my first ever. It was a lovely bonus considering that they had me at sweet tea. Hugo was alert for this part of the presentation so I’m guessing the dog tags were his idea. 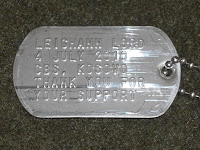 Leighann Lord is a stand-up comedian, who's style is best described as "Thinking Cap Comedy." If comedy were music, she'd be Jazz. She's George Carlin if he'd been born a Black Woman. Check out her upcoming shows @ www.VeryFunnyLady.com. Join her on FaceBook. Follow her on Twitter.


Posted by Leighann Lord No comments: Links to this post