From the Hate Mailbag, Just in Time for Valentine’s Day

This was not what I had planned to post this week but on Monday I got a piece of hate mail. It's not my first and probably won't be my last. Indeed I get it so rarely that when I do it’s unique and weirdly special. What surprised me is that I didn’t think I’d done anything in particular to provoke it.

Listen to the BlogCast


I received a comment through my website about a blog I'd done last year called "Asshole or Asperger’s." In short the blog was about my difficulty sometimes in telling the difference between someone who is rude and someone who has the type of autism that – as Wikipedia says – “is characterized by significant difficulties in social interaction.” I received several comments at the time including one from a reader with Asperger’s, which I found enlightening.

It's a basic comedy rule that you're not going to find something funny if it hits too close to home. I, for example, find absolutely nothing funny about my fear of insects. On the other had as a stand-up comedian and writer, I understand that there's always a target whether it be a person, thing, event, or concept. Someone is going to get their feelings hurt. And while comedians are not charged to do no harm, I try not to go out of my way to be hurtful. So I was surprised when I opened the email and saw this: 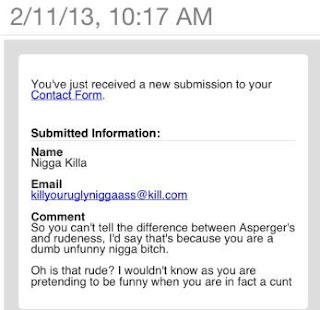 After reading this I wasn't sure what to do with it. From past experience I know that replying is useless. Someone who sends an email like this is not looking to engage in meaningful conversation. They are a digital drive-by shooter; a techno terrorist, a troll. I struggled with whether or not to delete the comment and forget about it, or keep it and show it. I chose to share – with the comment: “I guess I need a new publicist” for two reasons.

First, I knew that if I posted it on Facebook and Twitter that family, friends, and fans would balance out the negative comment with positive ones. They would castigate the sender and say nice things about me, which quite frankly I could stand to hear given the ugliness of the email.

And as I'd hoped, the responses ranged from heartfelt to outraged. One of my sorority sisters said, "Oy, I'm so sorry you had to experience this, sis."  I said, "I'm not. It's good to be reminded that not everyone is in your corner and that we, as a species, still have a lot of work to do."
Some of the nicest comments came from folks I didn't even know, like Sherry. When a mutual friend shared my post and comment, she said:

"GOOD FOR HER! Take the wind out of that POS sails! She isn't giving him power that is a strong soul!! More people need to learn from her. I'm glad this ass wipe was exposed. I hope more people see it and get just as disgusted as I did that people like this still exist. Leighann you're a hero in my book!"


My second reason for sharing was that we can only fight racism, misogyny, hate, and ignorance if we see it. This is not a time for tilting at windmills. We must face the enemy, eyes wide, fixed, and focused. "With your shield or on it."

Clearly this bile-spewing human – and I use the noun loosely – sought to insult me culturally, personally, intimately, and professionally. And just in time for Valentine's Day; a Black History Month bonus if you will. But it prepared me for a comment I received the next day on my YouTube page, presumably from the same sender: 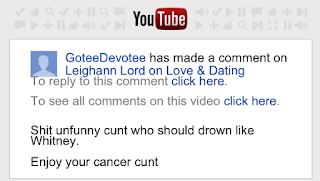 When it rains it pours right?


Sadly, when it comes to race and gender, my skin has grown thick over time. Nigga? Cunt? Is that the best you got, Player? What bothered me more was that the Brut said I wasn't funny. Seriously? Well, to be fair, funny is subjective. But if he can't even spell nigger then he's really not in my target audience.
I take solace in the fact that while he may not enjoy my sense of humor, he clearly finds me compelling. I somehow made a knuckle-dragger read an entire blog post, watch my videos, and comment. #Winning.

So, how was your Monday?

While there's certainly stand up out there that I can't stomach because it seems misogynistic or racist or ignorant in some way, there's not usually a good way to tell, since, you know, comedians tell jokes.

Like Moshe Kasher says in his act, "if at any point you become offended, understand--that's just you, being a bitch."

That being said, I think your statement of intent explains well that a) your joking, and b) you really are trying to get at some larger truth about stuff and don't "go out of [your] way to be hurtful."

And then, of course, trolls do go out of their way to return humor with hurt.