It’s Always the Year of the Asshole 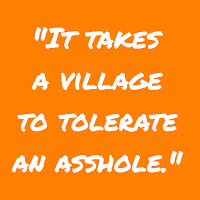 At a recent comedy show there was a table of disruptive people. They weren’t heckling the comedians directly, just talking animatedly amongst themselves. This seemed odd since this wasn’t a random bar show. It was a fundraiser with tickets sold in advance. These people had chosen to be there and yet their incessant chatter created a distracting undercurrent of noise that lasted the entire show...


At the end of the night, several audience members who had tried in vain to enjoy the show came up to us and apologized for the disruptive group. No one – no one – from the offending table apologized for themselves, but Assholes never do. Assholes learn early in life that others are often more than willing to step up and apologize for them.

As always, being well-heeled helps. It greases peoples’ necks to help them turn their heads to look the other way. The more money you have, the bigger Asshole you can afford to be. But it’s not just about financing. Money doesn’t make you an Asshole. A lack of care, concern, and character can exist in any income bracket. Just ask a teacher.

One day, my high school gym teacher substituted in my social studies class. And by substitute I mean he just sat there killing time until the end of the period because he didn’t want to be there either. In a white polo shirt and khaki shorts he looked out of place in the classroom. He was much more at home in the gym; swaggering, yelling, and whistle blowing. But in Catholic school, having a substitute teacher was no excuse for students to go all helter skelter. But in the early afternoon on a nice spring day, it’s hard for 16-year-olds to sit still. We began chatting amongst ourselves; low and furtive at first and then full on mass murmur.

Mr. Gym Teacher let it go for a while. And then he suddenly announced to us: “You know, this is who you are. You don’t suddenly, magically become a better person. If you’re an asshole now you’re going to be a asshole later.”

What?
What’d he say?
Is this going to be on the test?

I understood what he meant and I figured he should know. Mr. Gym Teacher had taught my freshman year square dancing class. (Don’t ask.) He openly mocked the boys who couldn’t keep a beat or follow the steps; yelling, “What are you, spastic!” Which of course made the boys dance so much better. And I remember thinking, “Wow, what an Asshole.”

You see, no matter what the calendar says it’s always the Year of the Asshole. They conflate being mean with being honest. They forget the constructive part of criticism. They thrive in polite society because we’re all too nice to call them on their bullshit. It’s so much easier to think that ignoring aberrant behavior will make it go away. It doesn’t.

If it sounds like I’m blaming the victim, I am. It takes a village to tolerate an Asshole.

Every now and then someone will cuss out an Asshole or maybe even knock them out. But it’s rare enough that the odds are in an Asshole’s favor. And when someone does stand up to an Asshole, they stand alone. Because just in case the champion doesn’t win, the bystanders don’t want to get on an Asshole’s bad side because they will retaliate. Count on it.

To be clear, I’m probably not talking about you. If we’re honest with ourselves, we can all be assholes (with a lower case “a”) from time to time because we’re human and not always being our better selves. Usually when we’re aware of it or it’s brought to our attention we feel bad, and maybe even embarrassed because that’s not who we are or want to be. An Asshole with a capital “a” consistently treats people like shit. No embarrassment, no regrets, no remorse and maybe even a butt load of pride because they’re living life on their terms, right? Just being themselves, right? They don’t get that being yourself doesn’t give you the right to inflict yourself. It just doesn’t.

And so every comic on the show got to deal with the Asshole table. The emcee started by acknowledging and attempting to befriend them. Throughout the course of the evening she moved on to placating, shaming, and then ignoring. Every comic used some combination of these tools to no avail. A pack of drunken Assholes is comedy show kryptonite.

Where’s a bouncer when you need one? Where indeed.

You may be wondering why these people were never asked to leave. That would seem prudent, yes? But that didn’t happen because they were friends with the people who were hosting the event. Of course they were. Somehow, Assholes always have friends, usually in high places. Somehow the money they pay to get into and disrupt an event is more valuable than the money everyone else pays to come and enjoy it.

So I was more than a little annoyed when the good audience member apology tour got to me. I was in no mood to hear “we’re sorry” from people who’d done nothing wrong. So, long story short, I guess that makes me an asshole.

Leighann Lord is a veteran stand-up comedian seen on HBO, Comedy Central, and The View. She is the author of Dict Jokes and Real Women Do it Standing Up; and is a co-host of StarTalk Radio, with Neil de Grasse Tyson.  Follow her @LeighannLord | VeryFunnyLady.com. To join TeamLeighann: Text FunnyLady to 22828. Listen to the podcast of her blog on iTunes and Stitcher Radio.