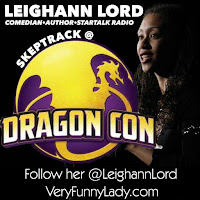 My Seven Favorite Moments from The Con

I was invited to perform at my very first Dragon Con in Atlanta, Georgia. For science fiction/fantasy fans this is like being asked to suit up and be the starting quarterback for your favorite team during the Super Bowl. I am not a casual sci-fi fan. It’s my area of expertise when I co-host StarTalk with Neil de Grasse Tyson. I’ll spare you my long list of book, movie, and TV show loves. Just know that my geek runs deep, or so I thought until I got to Dragon Con.

LISTEN TO THE AUDIO VERSION


The first day of the Con I made it as far as the Marriott Hotel lobby where a mass of cosplayers whirled around me. Their costumes were elaborate, detailed, and looked frighteningly authentic. There were Gladiators, Cylons, Wookies, princesses, Daleks, vampires, Storm Troopers, Tribbles, fairies, starship captains, and superheroes aplenty. Not to mention the people who did mash ups [like Arthur Dent (Hitchhiker’s Guide to the Galaxy) wearing a Star Trek bathrobe], and those who created their own characters from scratch. And so there I stood, frozen like a Doctor Who Angel clutching my Dragon Con credentials, schedule, and map. I didn’t dare blink.

How could someone one from the bustling metropolis of Gotham become so overwhelmed? My barometer for weird is set pretty high but being a native New Yorker is about not seeing strange things otherwise I’d never go anywhere or get anything done. That’s why the Naked Cowboy and the bare-breasted women in Times Square aren’t an attraction to see but an obstacle to avoid.

I was aroused from my hotel lobby stupor by a text from the Science Track organizer asking if I had gotten lost on the way to our evening meet up. “No,” I texted back. “I’m not lost. Just overwhelmed.” No questions asked a Con volunteer came to get me. I was easy to find. I wasn’t wearing a costume.

As my mind adjusted to the Dragon Con universe – whose center for me was the Marriott orbited by the Hilton and Hyatt hotels – I soon realized that I wasn’t just among friends. I was with family: an artistic, brilliant, and sometimes socially awkward family. Had a bomb dropped on Dragon Con, America would never survive the creative and intellectual loss.

There’s no way to adequately describe what my four-day trip to Never Land was really like but here are my seven favorite Dragon Con moments.

1. Sister, Can You Spare an Ear Cuff
At Skeptic Track’s opening panel I casually mentioned that I’d forgotten to bring my Bajoran ear cuff. A woman from the audience called out that I could borrow hers. I thought she was joking; you know, just being nice. So I was stunned when she showed up later that evening before my comedy show ready to actually loan me said ear cuff. What! Who does that? Folks who go to Dragon Con, that’s who.

2. The Best T-Shirt Ever
The Dragon Con Dealers Hall was the place to buy all things geek chic. I got a nerd-gasm just walking in the door. (By the way, the music playing in my head as I did so was the theme to Battlestar Galactica, original series.) Okay, yeah, I can buy all this stuff online. But there’s nothing like going over to a weapons table, ogling the swords, and picking one up to see how the weight of it feels in your hand. Admittedly, I’ve been watching way too much Walking Dead and have been channeling my inner, Michonne. But you know what they say, swashbuckle hard or stay home. I feel the same way about magic wands; but duh, I already have one. Go Ravenclaw!

With great restraint I only bought two t-shirts. The first was a BSG shirt that said: “WTF. What the Frak!” The second one said: “You Never Forget Your First Doctor.” Mine is the tenth, the über sexy, David Tennant. The t-shirt I regret not buying wasn’t from a franchise but still wins the dilithium crystal award for best smart and funny message. It said:

What do we want?
Time travel!
When do we want it?
Irrelevant!

3. You Know What They Say About Guys With Big Ears
I had many cool conversations at Dragon Con but my brain – perhaps to protect me from overjoy overload – only remembers a few snippets like:

HER
My husband has a PhD in biochemical engineering.

ME
My boyfriend has a tattoo.

Or stepping into the elevator and hearing, “Welcome aboard.” And when leaving me saying back, “You have the con.”

My favorite was overhearing a guy say, “I’ve gotta find some fake elf ears.” And me thinking, “Dude, they’re all fake.”

4. Hypatia: A Skeptic, Not a Sneeze
I marched in the Dragon Con Parade as Hypatia of Alexandria (AD 351–370), a Greek mathematician, philosopher, and skeptic. I was in the “Skeptics in History” group alongside Plato, Lucian, Galileo, and Frederick Douglas. Full disclosure: I had no idea who Hypatia was when I agreed to be her in the parade. I was just happy someone else was providing the costume and I didn’t have to squeeze one into my carry-on. When I read up on Hypatia I realized why she’d been in my educational blind spot. Christians had skinned her alive and that’s not the kind of thing they teach in Catholic School.

More disclosure: I’ve pretty much given up on humanity. I think we suck as a species. I keep a towel handy just in case the Mothership ever swoops in to rescue me off this bipolar rock. But during the parade a group of little kids began chanting: “Galileo! Galileo! Galileo!” Sure, it would have been better if they’d been chanting, “Hypatia! Hypatia! Hypatia!” But them knowing and being excited about Galileo gave me hope. It means maybe I won’t root so hard for the Cyber Men, the Daleks, and the Borg.

5. The Amazing Randi
When your first name is “Amazing,” you’d better be. And he is! I met The Amazing James Randi at the start of the Dragon Con Parade. I’d just seen the documentary, Honest Liar and yet I was unprepared for Randi’s compassion, wit, and sharp mental acuity; wrapped up in a diminutive package. He would’ve made an awesome Dumbledore.

6. Pan-Trackual Healing
The Skeptic Track invited me to Dragon Con but I also got the opportunity to participate in the Science and Space Tracks as well, which I guess makes me pan-trackual. That’s a Latin word meaning big geek love.

I moderated the late night “All Things Space” panel and got to rub elbows with a technologist, a scientist, an astronomer, and a chief engineer. Yeah. I’m bragging. The most inadvertently controversial moment came when I asked, “What’s the best school to attend if you want to be an astrophysicist?” School rivalries broke out and I thought I was going to see a science smack down. I mean who doesn’t want to see an ivy leaguer get their ass kicked, right? But alas, my most frightening moment was contemplating what would happen if we suddenly lost all of our in-orbit satellites. No cell phones? No wifi? No Netflix? Egads! I can’t, people! I just can’t!

While my SkepTrack stand-up comedy show was fun, it was nice to do something a little different on the Science Track’s “Solve for X” Show. It’s a variety show where the performance prompt is “Science!” Originally I was going to share a humor article I’d written for the Guardian about Hurricane Katrina and global warming because both of those things are oh so funny. But at the last minute I changed my mind and read another piece from a book I’m writing called Real Women Do it Standing Up. The story: “Peeing Standing Up: A Four-Year-Old’s Failed Experiment.” Watching the adult me re-enact why the child me couldn’t quite get the correct back arch and angle to make the urine go into the bowl and not on the floor was mortifying and hilarious.

7. Every Girl Needs a TARDIS
Oddly enough my best Dragon Con moment came after I returned home to Muggleville. I’d bought a Doctor Who license plate cover that says, “My Other Ride is The TARDIS.” I went to my local garage to have them put it on my car and the Abbott and Costello conversation went something like this:

MECHANIC ONE
(to MECHANIC TWO)
“What’s a tardis?”

MECHANIC ONE
What kind of turtle is that?

ME
One that can travel through time.

I hope my first Dragon Con won’t be my last. I’d love to be invited back. (I have to go back. Being on the outside feels too weird now.) Besides, I never even made it over to the Westin, yet another hotel in the Dragon Con universe. Ah, so many panels so little time. How does one make them all? With a TURTLE, of course, but only if you’re cosplaying as a Teenage Mutant Ninja TARDIS.

The Urban Erma, the longest running column on StageTimeMagazine.com, was created and written by stand-up comedian, author, and StarTalk Radio co-host Leighann Lord. Listen to the podcast on iTunes and Stitcher Radio. Get her e-books on AMAZON!

That's funny. Somehow they established the hard fact it is a turtle. Just trying to determine the species is all.