Bite My Shiny Metal Ass: How Futurama Changed My Life

Thanks to Netflix I’ve now watched all 10 seasons of Futurama, the science fiction animated cartoon series created by Matt Groening (Simpsons). It began in 1999 on FOX and ended in 2013 on Comedy Central. Digesting 14 years worth of an awarding-winning TV show in just a few months adds to my sci-fi street cred but it’s changed me.

LISTEN TO THE PODCAST

When I enter a room now I can’t seem to stop myself from saying, “Good news, everyone!” Even if no one is in the room and I don’t actually have any news.  Similarly, yodeling, “I’m back, baby!” is satisfying but awkward in any and all venues other than home.

I’m intrigued that it’s the Manwich that survives into Futurama’s vision of the 31st century. It’s the favorite meal of Hermes, Planet Express’ Jamaican accountant. I’ve never had a Manwich but I’d like to try one. I guess subliminal advertising does work. And, oh yeah: It’s also cool that there’s a cranky, workaholic, perfectionist West Indian in the future too. This gives me hope on a personal level.

Every time I sigh in exasperation, which is surprisingly a lot, I think of Zapp Brannigan’s beleaguered first officer, Fourth Lieutenant Kif Kroker of Amphibios 9. He’s adorable. I’d be his “Fonfon Ru” any day. Captain James Tiberius Kirk (Star Trek) does not have a monopoly on green alien love.

On the rare times I get a pizza delivered, I’m on the look out for orange-haired delivery boy, Philip J. Fry. I mean if he could survive being cryogenically frozen for 1,000 years he could bicycle through the Hood unscathed, right? At the very least, his ability to stand still for long periods of time might help him survive a crack head attack.

When I feel myself about to be bested in an argument I mutter what may be Futurama’s most famous catch phrase: “Bite My Shiny Metal Ass!” “Kill all humans,” works too and both are spoken by the show’s favorite robot – no, not Calculon – Bender. This is hilarious for fellow Futurama fans but leaves everyone else feeling confused, uncomfortable, and unwittingly doing a Professor Farnsworth impression: “Whaaat?” 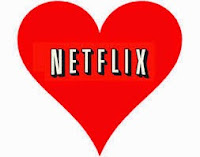 So, what’s next? NetFlix has spoiled me. The more I see the more I want, but it doesn’t have everything. Like, why oh why does Netflix still not have episodes of Stargate SG-1? That’s another 10-season commitment, but I’m already five seasons in – thanks my local library’s surprisingly vast video collection – so I’m totally up for it.  Alas I have not watched Stargate in all its incarnations (Atlantis or Continuum) but Stargate-CSI Brooklyn might be interesting.

If I may digress for a moment, my main Stargate complaint however is that the show has no Prime Directive like they do on Star Trek. (True, they didn’t always follow it, but at least they had it.) On SG-1 they traipse through that gate like they’re going to the mall. They make almost no effort to conceal themselves, meddling in the local culture with impunity. And then they’re perennially shocked at the consequences of their reckless, high-handed behavior. As a not so veiled version of American foreign policy, it’s fascinating. If and when it ever pops up in my Netflix cue, maybe congress will binge-watch it with me and consider funding a Dial-Home Device (DHD).

Netflix does have the sci-fi series Farscape (1999-2003). I’m only partway through season one and I adore the eminently quotable, Zotoh Zhaan. She's a Delvian - a sentient blue, plant species with a humanoid form -  played by Australian actress, Virginia Hey. In an early episode she asked her fellow crewmembers: “Am I the only species that doesn’t thrive on conflict?” Apparently. But she completely had me at, “Confront your demons or they will chase you from the shadows to the pyre.” I dig it because doing so gives me the chance to tell my demons to, “Bite my shiny metal ass.”

The Urban Erma, the longest running column on StageTimeMagazine.com, was created and written by stand-up comedian Leighann Lord. Listen to the podcast on iTunes and Stitcher Radio. Get her e-books on AMAZON!