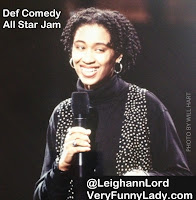 A fan contacted me on Twitter (thank you @KillahCam52) to say that he was watching me on Def Comedy Jam. It inspired me reach back into my archives and dig out this photo taken during the taping oh so many moons ago.


►LISTEN TO THE PODCAST!


What You Can’t See in the Photo

I was absolutely exhausted. I’d just flown back home to New York the night before from a gig at Catch A Rising Star (Las Vegas). I was also sick with a 102 degree fever. Let’s just say medication and makeup work wonders.

I was also more than a little bit nervous. I’d been invited to audition at Caroline’s Comedy Club for Def Comedy Jam’s Talent Coordinator, Bob Sumner. I was confused by the invitation and remember thinking “Really? Have they seen me?” I was not then, nor am I now what you’d call a Def Jam-style comic.  I didn’t think I fit the vein of the show but I was not one to turn my nose up at an opportunity.

Although it was scary, I’m glad I did it. Wait, let me rephrase that. I’m glad that I did it my way. I did not get on the show then try to convert myself into a high-energy, scatological act. I tried to be myself, going in with my best “A” game at the time. The fan emails I’ve received over the years have confirmed for me that I made the right choice. One email in particular really touched me:

“Leighann, My name is Lakeenya, and I just recently watched you perform on Def Comedy Jam. I think you bring a sense of intelligence and sophistication to the stage. Most audiences expect the demeaning and (profane) language that is easy to acquire in one’s material. Which is why you surpass all others. Not only do you not lower your pride or intellect by taking the lazy and easy way, you also leave the audience with something to think about. You provide the world with an overview of a strong intelligent black woman. The ironic thing is, after watching you and the others, not only could I not remember what the other acts were about, I could recite yours line by line. That’s when you know that you have seen a really great performance.”

This is indeed terribly ironic since a new booker recently told me that he could no longer use me for his gigs because I was known as “an intelligent comic” and he didn’t think this was a good fit for his audience. This is despite the fact that I’ve been performing, with great reviews, for said audience since 2002. C'est la vie, right?

The point is, I’m in a business where people’s opinion of me matters. Artists sometimes get side-tracked though trying to figure out what “they” want. They can be the audience, the industry, the sponsors. As a stand-up comic my obligation is to entertain and make you laugh.  How I do that is up to me, not they. Although the pressure can be enormous, following the herd only works if it’s headed someplace you want to go.

I’ll continue following my path and hope it takes me someplace def.

The Urban Erma, the longest running column on StageTimeMagazine.com, was created and written by Leighann Lord. Listen to the podcast on iTunes and Stitcher Radio. Watch the video edition on YouTube.com. If you enjoy The Urban Erma please leave a comment, like it on Facebook, follow on Twitter, and share it with your friends. (Share it with people who are not your friends and maybe they will be.) TheUrbanErma@gmail.com

You gotta proofread, girl! And if it's an unfamiliar word, look it up! The phrase, in French, says, "that's life!" C'est la vie!

UGGGGG! Frak it all! I left that as a place holder and forget to go back and change it. Thank you for being on it and keeping me honest! MUCH appreciated! SERIOUSLY!!!