Running at the Speed of Evolution 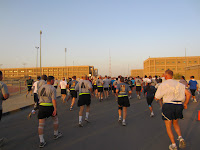 When I hoped for the chance to do another 5K run before the end of the Summer, I never dreamed I’d be doing it in another country. September found me in the Middle East on my seventh tour with Armed Forces Entertainment. While staying at Camp Arifjan in Kuwait, the head of our security team knew I liked to run and mentioned that the base was doing a 5K Freedom Run to commemorate the 10th Anniversary of September 11. Perfect! I was all in. I did blanche a bit when he told me that the run was at six o’clock in the morning. But hey, when I wished for a chance to run, I neglected to tell the Universe what time would be good for me.


When I checked in at 5:30 a.m., I couldn’t believe how crowded it was. There were easily several hundred people there up and ready to go. Almost every branch of the service was represented. I, of course, was the only comedian. I had invited my tour mates to join me, offering to walk with them instead of run, but they demurred. In fact, they looked at me like I was completely out of mind. No argument there.


The race began right after Reveille. Ironic, since just a few days earlier, Reveille had found me snuggled up in bed. In a sleepy haze I wondered, “Who in the hell is playing John Coltrane at this hour of the morning!” I vaguely hoped they took requests. “Moody’s Mood for Love” anyone?


As the run got underway in earnest, the bulk of the crowd surged ahead of me with ease. I was intimidated. These were all active-duty service men and women in peak physical condition. With your adrenaline flowing, it’s easy to fall into the trap of wanting to keep up with the pack but I resisted. Instead, I set my pace and stuck to it.

My iPod soon became unnecessary as the chanting behind me grew louder. I glanced back over my shoulder and saw what looked like an entire platoon, jogging in formation behind me, lead by their color guard, flags flying.

It was a stirring sight, although it could have easily transformed into a scary one if they had been carrying weapons instead of flags. I realized I was not going to outrun them. I moved aside as they passed me. For a moment, as they swarmed by, it felt as though I was caught up in a sea of man sweat and testosterone. Ahh.

I soon learned, however, that being in good physical condition does not necessarily make one a runner. I won’t say that there were just as many people behind me as ahead of me, but I damn sure wasn’t last. It gave me a thrill to think that the folks trailing behind me might be able to kill me with their pinky, but they’d have to catch me first.

At around the two-kilometer mark I saw the camp photographer. I had met him the day before when our group went to lunch with the base commander. I waved at him as I jogged by, and he couldn’t hide the astonishment on his face. “You’re the last person I expected to see here,” the photographer said. Fighting words? Not really. I didn’t take it as a comment on my physical fitness. I’m tight. But it was a nod to the widely-held belief that comedians aren’t early risers. On the whole, we’re not. To be fair though, that’s hard to do when you work at night. But I wouldn’t have missed this run for the world.

For a goodly stretch I was running by myself. With no one nearby it felt as though I was barely keeping pace with the speed of evolution. It felt a bit lonely — without a “battle buddy” — but it was also peaceful.

If you finished the run in less than 25 minutes, you got a T-shirt. I didn’t get a T-shirt, but I wasn’t disappointed. I had just run my best time ever, 30 minutes, and I’d done it at sunrise in another country, getting my wish to do a 5K before the end of the summer. Winning!

Does it get any better than that? Actually, it does. My favorite moment during the run was when I overheard one soldier say to another, “You know, this doesn’t really count unless you’re doing it armor.” And I thought, “Ha! Try doing it in a thong. That’ll really make a man out of you.”

Congratulations!!! 30 minutes is awesome! You rock!

I'm so proud of you! Love that man sweat - lol!
Lorna

@Jocelyn: Thank you. I haven't been able to duplicate that time yet. I guess there's a lot to be said for adrenaline, but it's also nice to know that I can get there.

@Lorna: Thank you too! I felt like I was running in a Weather Girls Video.

So very hard to believe this was over seven years ago. I'm so glad I mentioned the event to you.