A Beautiful Day for a Protest 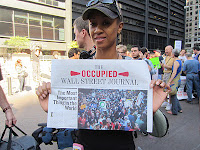 Two friends invited me to go with them to the Occupy Wall Street protest in New York City and I said yes for purely selfish reasons. First, I hoped to get a good story out of it. Second, the weather forecast said it was going to be 80 degrees and sunny. What better conditions to exercise my constitutional rights? Yes, I’m a fair-weather protester. I don’t work for the United States Post Office. If the forecast had been for rain, snow, sleet or hail, the most protesting I would have done would have been to hole up in a Starbucks and send an angry email.


And while I never considered going to the protest alone, I was more than happy to go in a group. Like drinking, I don’t think friends should let friends demonstrate alone. I guess that literally makes me a social activist. The Unabomber went solo and look what appened to him. For starters, a horrible mug shot.

After deciding to go to the protest the next big decision was, what to wear. I mean, really, what do you wear to an occupation? There are protests in the Middle East all the time, but they don’t show a lot of women, and the men are all wearing facial hair and anger.

I guess, very practically, you should put on something you wouldn’t mind wearing to jail. If the media is to be believed, the big house is a hot bed of involuntary homosexual activity. That’s not really my thing. At times, though, I have considered being gay for my career. America seems to love Lesbian comedians, and a part of me — the broke part —  would like to cash in on that. But just my luck, I’d get called on it, and I’d end up being outed as a closet-heterosexual. Sadly, I’m kinda old fashion on this issue. There can only be one bitch in my relationship and I’m her.
I finally settled on wearing black jeans and a t-shirt that read, “I Was in Paris.” It was both an homage to the French Revolution and an alibi should I need one. I wasn’t really planning on going to jail, but I had to at least consider the possibility. I’m brown. Brown people go to jail more frequently and for longer periods of time than do non-brown people. It’s like some kind of hyper form of Affirmative Action.

So, I needed a plan. I considered the direct approach: Go to the Wall Street protest, introduce myself to the officer in charge and say, “Excuse me, Sir? Where do I need to stand, how do I need to act, and what do I need to do in order to not get your attention? Thank you. Here’s a donut. Don’t eat it all in one place.”

In the event that things went really awry, my plan “B” was to stand next to someone browner than me — bag of donuts at the ready to throw at the cops as a distraction.

I was also a bit concerned about the possibility of physical violence. The images of people being pepper sprayed by the police for no reason were rather chilling. Should I consider adding safety goggles to my ensem? I was also worried that by the time I got to the protest the police would have stepped up their game from pepper spraying to tasering. Low level electrocution can be hell on a hair do. Note to self: bring a hat.

And as a general rule of thumb, you never want to be the first person tased. Everyone’s excited and pumped-up. The combined jolt of electricity and the adrenaline could kill you.  And any money that comes from the resulting law suit wouldn’t benefit you. It would be posthumously awarded to your family. Bummer.

So, I’ve established that my reasons for going to the Occupy Wall Street protest were mostly shallow, but not completely. I do agree with what the demonstration stands for. If you don’t know, I recommend you visit http://occupywallst.org/  Let’s face it, you’re not reallya  movement until you have a website.  In a nutshell, they are demonstrating against the growing wealth inequality and the corporate influence of government.

Hell yeah! What they said.

“Occupy” movements are spreading to other cities across the United States and Canada. I have no idea why the Canadians are protesting. Perhaps it’s their proximity to a quickly declining world power that threatens to suck them down with it.

There are, of course, those who are speaking out against Occupy Wall Street, denouncing it as anti-capitalist. Seriously? I mean, really, what would that counter protest look like? People in suits shouting, “Greed is good! Poor people suck! Power to the pretty!”

Ironically, had my life gone according to plan, I might have been one of the people the Occupy Wall Street folks are protesting against. I was a finance major. Don’t judge me. I was  young,  and I wanted to be Alex P. Keaten. My plan was to work on Wall Street, to be a broker in the pit, wheeling and dealing with the big boys. That’s right, if I had only stayed the course I, too, could have played a part in bringing down the economy and destroying people’s lives.
But in hindsight, I’m glad I didn’t. I’m sure the infamous one percent, in control of the nation’s wealth, would have found a way to make me their fall girl. Perhaps on a charge of economic terrorism I would have been the one to go to jail. You know the brown ones always do.

Such a fun post. And what an exciting, illuminating, and energetic time it was. Thank you so much for participating and sharing your very witty thoughts!

Poignant post; though somehow the most memorable part(for me)will be that you once wanted to be Alex P. Keaton.

I tried to get my wife to come with me on the anti-war demos I attended, but she wimped out on spurious grounds like having to work as a nurse.

Which scuppered the plan of using her as a decoy, because I am not brown and she is.

If you go again, maybe you can get a friend to dress as Charles Darwin as a decoy.

Funny as hell as usual, Leighann. You're spot on and laugh out loud funny at the same time. Even though what you said is true and really NOT funny, you made it so and drove your point home.

@Yasmin, Thanks for reading and being part of such an amazing day! Same Bat Time, Same Bat Channel?

@Sean: I screamed with laughter when I read your comment! You had me at "spurious!"

@Anonymous: Thanks for the great compliment. With praise like that I should hire you as my publicist!

Great post, Leighann! BTW, back during the protests against the Vietnam War, we were advised to cut all the pockets our of our clothes, so the police couldn't plant drugs on us!

Of course, we didn't have cell phones to carry back then.

Thanks for reading! No pockets? I never knew that.